October 10, 2021
In Africa, the history of oral tradition has maintained the richness of the story, of the spoken tale, of the poetic recital to give voice to the existential mysteries, of life and of death.

When talking about Senegalese poetry it is called Léopold Sédar Senghor, the poet who sang blackness. His poetry, symbolist, was based on the singing of the word ENCANTATORIA, with the aim of establishing a universal civilization. I thought the symbolism of poetic language could be a tool to achieve it.

This is the unesco image that accompanies the World Poetry Day in 2021. Day established since 1999, during the 30th General Conference of Paris. It seems that these graphic signs coming out of the pencil are expanding and flying, interacting with each other to support linguistic diversity and facilitating an artistic means of communication in languages, however minority they may be. 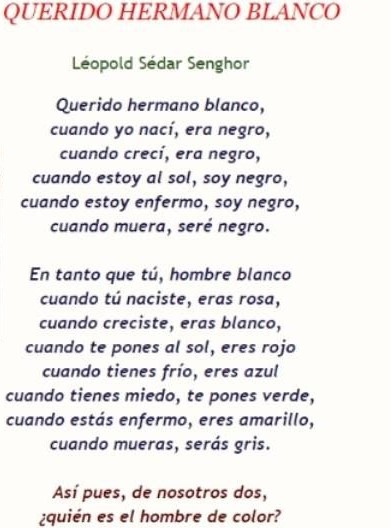 The Uruguayan writer Eduardo Galeano, included it in one of his books:
https://images.app.goo.gl/ehbvPxjSg3nC7use8

Cuando yo muera habrá que reír,
habrá que sonreír
Because dying is really living
Among the ancestros so vivos
No quiero neither órgano nor piano
Neither an underneath nor a book solo
I claim todos mis cánticos de África


Within today's African poetry, there are a significant number of poets. His poems talk about immigration, pain, sex, childbirth, poverty, loss, pain to leave his home and leave his...

Warsan Shire, is a young poet, feminist activist. He lives in England. Her family emigrated to this country when she was very young. She is requested from different countries to give lectures and to recite her poems. Singer Beyoncé used some of her poems for the publication of Lemonade.

Poem Hogar by Warsan Shire, (talks about the must-see in another country):